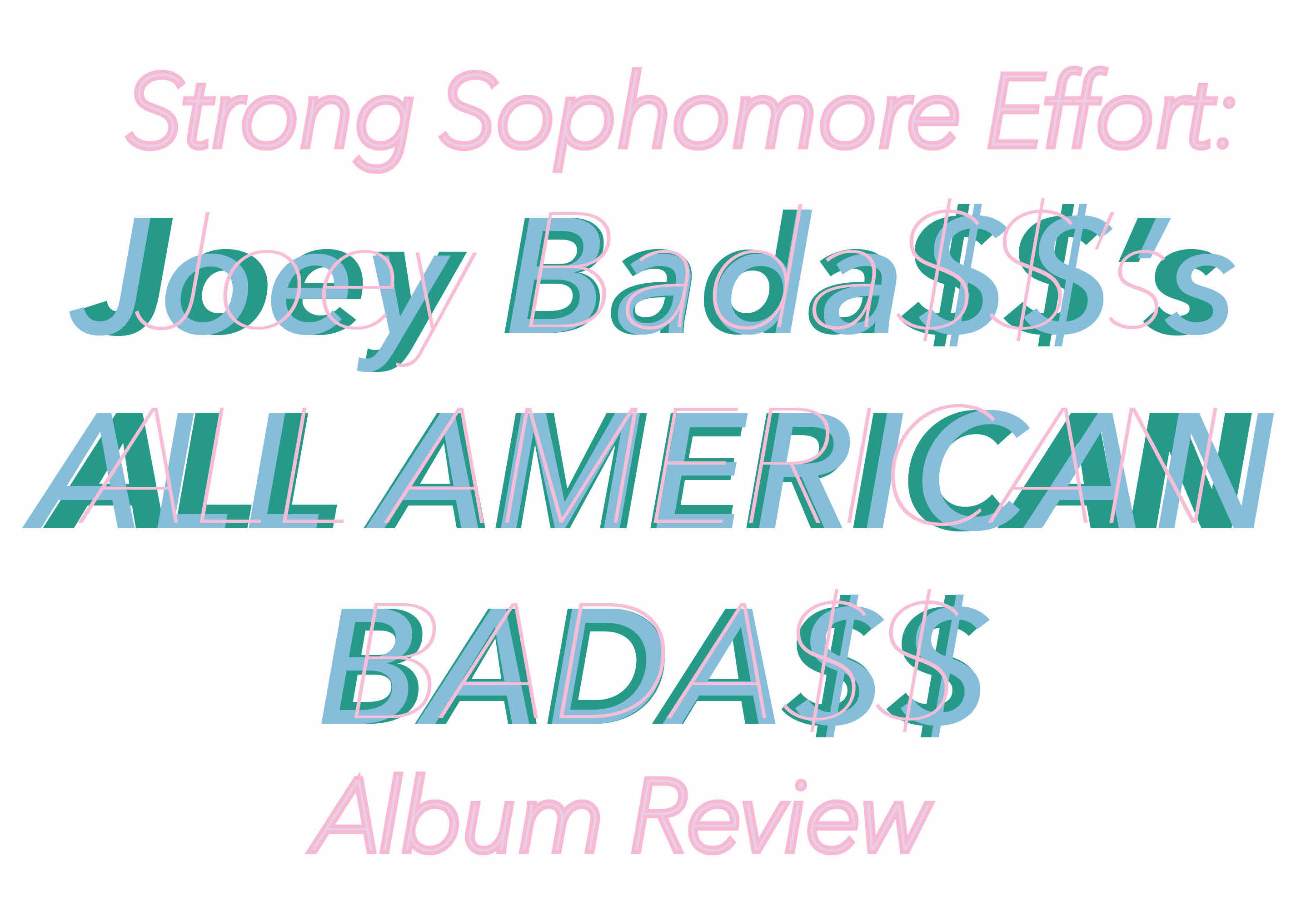 Joey Bada$$’s sophomore album, ALL AMERIKKKAN BADA$$, finds its grounding through the portrayal of the artist’s thoughts and feelings towards the black community’s position in the modern American landscape. He reported that the record would be a powerful force in furthering the mentality of freedom and equality amongst his listeners. With the help of DJ Khalil, 1-900, and Pro Era mainstays Kirk Knight, Chuck Strangers, and Statik Selektah, Joey Bada$$ follows up his 2015 debut with a solid summer playlist of sorts bearing tracks with notable intention and sincerity within the smooth, Brooklyn-based rhymes.

The first half of the album plays like a soundtrack for constant, sunset-lit drives; reminiscent of his 2012 hit “Waves”. While we’re all used to likening Joey’s style and beat preferences to that of 1990s rappers, he does not freight from delivering his lines over more contemporary sounding beats. Smooth, catchy, upbeat tunes and hooks lather the tracks providing immediate ear-candy for the listener. At some points, the wording of the hooks and phrases seem slightly generic. Nonetheless, It’s easy listening, keeping things exciting with the occasional swift beat change or extrapolation on an earlier motif. It’s a noticeable departure from the old-school sounds we heard on 1999, as the artist is now subscribing to the common 808s and quick hi-hats of today. But all Joey Bada$$ ever needed was a beat, and with that, the rapper shows off some of the most focused rhymes we’ve heard from him. Each song usually carries with it two verses: one for Joey to express himself as every other humbled rapper would, recalling his struggle times or impoverished memories, and the second: to manifest his thoughts on topics such as police brutality, systemic and historic oppression, and how black people can be a strong force with the right intentions. The coexistence between serious, heavy words and feel good, catchy beats can sometimes become confusing, but it doesn’t force our necks to remain still. Songs like “DEVASTATED” and “Y U DON’T LOVE ME (MISS AMERIKKKA)” make moving your body with at least a tiny nod on beat irresistible.

With the second half of the album, a transition from modern sounding 808s to jazzier, boom bap drum kicks takes place– and it’s very welcome. It seems that Joey is in his complete element flowing along beats of this variety, making me believe that Statik Selektah is the truth (the Selektah produced track, “SUPER PREDATOR” is a definite high point in the album in terms of production quality and lyrical substance). In the land of the second half, the production also gets a tad darker and more sinister, perhaps a rendition of America’s history. Joey keeps his rhyme habits half for the sake of slick flows and half for the sake of his noble message, just as he did before. There are times throughout the album where he’ll play with different cadences and rhythmic flows, but he doesn’t like straying too far from the even beat counts. This absolutely does not mean his flow is lacking though, take note. It’s also worth noting how he likes to ad-lib; with them, he creates some distance between him and his contemporaries, opting for harmonic, higher-pitched matching instead of the explosions of sound you might hear elsewhere. Joey Bada$$ doesn’t demonstrate any things that other rappers can’t do on the record, but still, his effort is admirable and his execution is considerably strong. However, the conclusion of the album didn’t feel enough like the end. I found myself waiting for one last moment of resolution; but alas, there was none.

This album won’t be number one on anyone’s top rap albums of the year, but was still a very solid sophomore installment. He tiptoes between contemporary and ‘90s style with impressive dexterity. He always has exciting bars, and this time brings an overall positive, insightful, and sincere message with his raps. The execution and sounds are strong, but lacks the unique draw of a classic. A solid 8.2/10 for ALL AMERIKKKAN BADA$$.