DJ Daniel is back for round 2 this week, and is leaving you with a fresh review of Anna Caragnano & Donato Dozzy’s Sintetizzatrice. 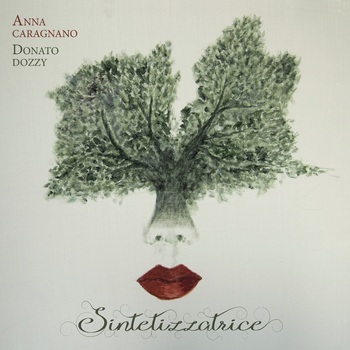 Donato Dozzy’s become the closest thing ambient techno has to a star in the wake of Voices From The Lake, his brilliant collaboration with fellow Italian ambient producer Neel, and his 2013 remix album Plays Bee Mask. The expectations for his collaboration with vocalist Anna Carragnano were appropriately astronomical. But Sintetizzatrice, their 9-track mini-album together, confounds expectations of both a Dozzy record and a producer-vocalist collaboration. For that alone it’s great, but there’s some pretty solid ambient music on this thing–though nothing anywhere close to those prior two albums.

The first question on a lot of people’s minds will be “where’s Dozzy?” His distinctive, burbling productions are nowhere in sight, just layers of reverb-soaked voices humming, whistling, chanting, intoning, and occasionally making a loud “dummmm.” This is Caragnano; Dozzy’s taken on the role of an unseen deity in rearranging and editing her vocals to fit his image. Thus, we get an approximation of techno, conveyed through the most organic instrument there is: the human voice.

It’s a subversive record, in no small part because the vocalist carries ninety percent of the burden. Though there’s too much digital trickery to just be a Caragnano solo joint, it’s really her record–which is refreshing given the hegemony male producers often hold over their female vocal collaborators and exploit aesthetically. It’s also a drastic left turn for Dozzy. In the months leading up to its release, ambient fans had no reason to not expect an album of Dozzy’s productions beneath Caragnano’s voice. That it’s not–especially given the stature of Voices From The Lake, which is basically the To Pimp A Butterfly of ambient techno–almost felt like a slap in the face at first.

But I doubt these were Dozzy’s intentions. This is first and foremost a collaboration between friends, an unambitious pet project, and making it must have been as easy as listening to it. Though Sintetizzatrice might underwhelm due to its 24-minute length and short track times, its length is nonetheless refreshing in that it’s an easy album to listen to in full while traveling to point A to point B. This is as casual as ambient gets, and though it’s by no means the year’s most impressive album, it might be the one I end up listening to the most.